The Search For Lost School Mates 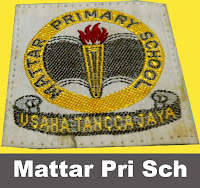 When I began this journey to find my lost school mates from Mattar Primary School some four/five years ago, I did not expect much success. After all, it has been more than 35 years since we last seen each other.

In my case, I have only photographic evidence of some school mates having visited me when I was in Pre-U 1, so, for me, that was pretty much the last time I've seen anyone from Mattar. Since then, my old schoolmates, have reminded me that I've been to a couple of 21st birthdays all of which I have no memory of, which is quite extraordinary given that i remember things quite well, even a visit to a longhouse in Sarawak when I was three+! Perhaps it is true. Younger memories are more 'impressive' and remained synapsed in our brains for eternity so to speak. We might forget where we last put our car keys, but hey, that lovely girl from kindergarten is still vivid in our minds.

In any case, there are two reasons for looking up my old school mates. One, I still keep a box of my childhood stuff from my Mattar Primary School. In that box are toys, art and craft stuff, a stamp album, autograph books, stickers, collectibles, etc. Over the years, when nostalgia hits, I would open the box and look inside. And wonder where all my playmates have disappeared to.

Reason No.2 is that I encountered some folks from the Singapore Memory Project and was encouraged to start sharing my memories from my past. Or at least log/blog them down somewhere. I had a rather unique childhood growing up in Geylang-Sims Avenue, so I thought I'd start from there.

So what I did was start a Growing Up In Geylang blog and began writing about my childhood in that neighbourhood. I also wrote about my friends from Mattar Primary School - same era - and about spending time with them especially in their homes in MacPherson Estate bounded by Circuit Road.

However, before SMP, I had already uploaded pictures of my stuff from that childhood memory box into Flickr account - a photo-sharing site. I was hoping my old classmates might see the stuff while surfing the Internet and contact me. One of them eventually did in 2011. By then, she was like the no.9 or 10 found. (At the time of writing, we had found 43/44, all in a span of 3-4 years!)

In any case, I signed up with Facebook hoping it would prove a good channel to connect with old friends. The think is, if you have a friend named Lucy Teo, there are hundreds of folks also named Lucy Teo. So which one is the correct one. And how about those with no profile pictures? And those who use their married names?

So, despite the common belief that FB is a godsend, it is not exactly a great channel to reconnect with old friends. It is after the fact (knowing that person's exact profile name) that it seems rather intuitive. My experience indicates that LinkedIn is a better place.

But FB was the place that connected me to my first school mate, Norien. Some juniors had started an MPS page and I had asked for information regarding my old school mates there. The juniors were about 13-15 years younger. But the photos they had still reflected the old Mattar I knew.

A dias I stood on in the field as a P6 kid leading the whole school through morning exercise was still there.

At the FB MPS group, many of its members were Malay and Norien was one. She was, however, also nostalgic but only a sometimes visitor to the Group. But Norien did read my comments or requests for information. Funnily, it took her a while to connect my initials TC to my real name. I use initials for my FB profile because that was my byline name when I was a popular trade journalist, so I had believed more folks would recognise me by my initials. Furthermore, I had joined FB to reconnect with old colleagues and work friends, not so much old old friends from childhood. - That would be extremely optimistic to think that my childhood friends would still recognise and remember me! The people we worked with in our 20s or later could recall us better!

So, it is quite amazing that in a span of 3-4 years, we were able to trace 43/44 childhood classmates!
It was not easy and the story behind that search will be told through this blog.

Below is the only school photo of us kids that dates back to 1972. We were all in P3 then.


Then, our form teacher was a relief teacher by the name Ms Lim Siang Ngoh, whom we all adored. Unlike the majority of teachers there at MPS who liked to employ corporal punishment such slapping, caning, etc. - a common practice with teachers back then), Ms Lim did not. She would rather talk to or counsel us. To say she was like a breath of fresh air is rather an understatement. She was like an angel sent from heaven! And being the angel she was, she would even invite us to her home in Old Airport Road (those red brick flats by the hawker center) for a visit and to play. It was during one of these visits that I learned a particular way to cook fried rice from her. That dish was never the same for me afterwards! (See later story).

But how did we end up with a class photo then? It was not common practice with primary schools back then.

Over the years, I had harboured this thought that the class photo was Ms Lim's idea - a kind of farewell memento of her relief tenure, but she has since clarified that the idea was the school's. The principal then was a Mrs Victoria Pereira, assistant principal was a Mr Wilson. Our school was a two-session school then. I remember the other session assistant principal being called Tiger Lady, so fierce she was!

But with this photo, I also wondered why the school ever took only one picture of us. There were no other photo sessions from P4 to P6. At P6, we left after completing our PSLE exams and got posted out to our respective secondary schools.

So you can imagine how precious this photo is to me and my classmates. And how without it, the difficult task of finding old school mates would be made even worse.

For some of us, this school photo is ultra precious, it could be our only childhood picture! Some did lose theirs (and family albums) after shifting and moving homes many times over the decades.